The development of the female breasts starts from the fetal stage itself and goes on until a much later stage in life, possibly stopping after childbirth.

When the female baby is just newborn, they are flat, but there is a single milk line below the nipples. This milk line cannot be made out clearly from the outside, but it may just as well cause a little discharge for a few days after birth. The milk line is what will develop much later into the breast later. But in the infant stage, it will jut out the nipples by a very small amount.

It is noteworthy that this milk line is present in both male as well as female babies. In males this remains undeveloped, but in females it develops into mammary glands. The development is controlled by the female secondary sex hormones, estrogen and progesterone. That explains why some men show presence of breasts; this is due to a hormonal imbalance in them. 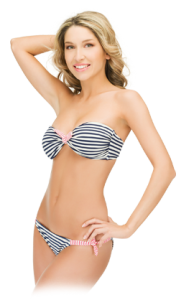 The second stage occurs during the pre-adolescent years. Females show the development of slight breast buds. This is just a slight protuberance seen around the nipples with a little growth of tissue beneath it. Milk ducts just begin to form and they form a slight mound around the nipple. The nipples appear to be raised a little and the areolas, i.e. the dark region around the nipples develop slightly.

This is the last change that occurs in the female breasts before the onset of maturity. Hence, when the girl steps into maturity, her breasts are no more than small mounds of tissue containing milk ducts just below her nipples.

These are the changes that occur during puberty. In most girls, puberty occurs between the ages of 8 to 13 years, though in some girls it can go up to 14 years or even more than that. Puberty changes are the first real step towards the advancement of full-scale adult breasts. During puberty, the breast tissue grows further. This makes the mound below the nipples enlarge and protrude outwards. The milk ducts develop further. At this stage, the breasts can be made out from the outside, but they will not have any contours or the shapeliness of the adult breasts.

The nipples become more pronounced and the areolas further darken in their color. The shape of the areolas change.

In women who do not have children, this may well be the last stage of development of their breasts. There may be growth in size and contours in the later years; but most of the size development has occurred by the time the girl reaches the age of twenty years.

Stage five is the last stage of breast development and it centers around pregnancy and childbirth. When a woman is pregnant, there will be definite changes in the shape and size of her breasts. For one, the breasts will grow larger. The nipples and areolas will darken and become more protruding. The milk glands will develop completely as they will fill with milk in the last month of the pregnancy.

Factors that Affect the Breast

During lactation, the nipples will reach their fullest size, and the breasts will also grow to their maximum curvature and roundness. Areolae generally darken during lactation and will show the presence of small raised mounds all over them. This change will continue as long as the woman is lactating, and in most women, it will remain even after the lactation stage is done with.

Hence, it can be said that a woman’s breasts are never fully developed until the lactation stage. In other words, women who do not give birth to children will miss out on the last stage of development of their breasts.

All stages of it are controlled by hormones. The secondary female sex hormones estrogen and progesterone look after the breast development. Since this hormonal concentration varies from one woman to another, their breasts will also differ from one another.

Hormonal changes are quite evident during the menstrual cycle of the female. Just before the periods, the breasts become fuller, the nipples harder and there may even be pain in them. Once the periods are over, the breasts return to their original shape and size. Many women who are not happy with their natural breast size are going for breast augmentation surgery while some use natural enhancement products like Breastrogen. Read this review for more information on that.

Despite having divided the process of breast development into five convenient stages, it must be borne in mind that this is quite a subjective human biological process and is prone to change from one woman to another.